So I was able to borrow my dads truck on Friday while my mother-in-law watched the kids so I could go pick up some apple and peach trees.  I decided to use only trees from Tractor Supply as they are cheaper and more convenient to pick up.  I still hope to buy some of the good trees from a nursery next spring, but with everything on my plate that wasn’t in the cards this year.  So after picking up a 150′ roll of remesh to use as fences for the trees I stopped at Tractor Supply and picked up two Fuji, a Gala, a Cortland, and a Yellow Delicious apple tree.  I also picked up one Reliance Peach and one Redskin Peach.  All of the trees are of the dwarf variety so they shouldn’t get more than 10-15′ tall. 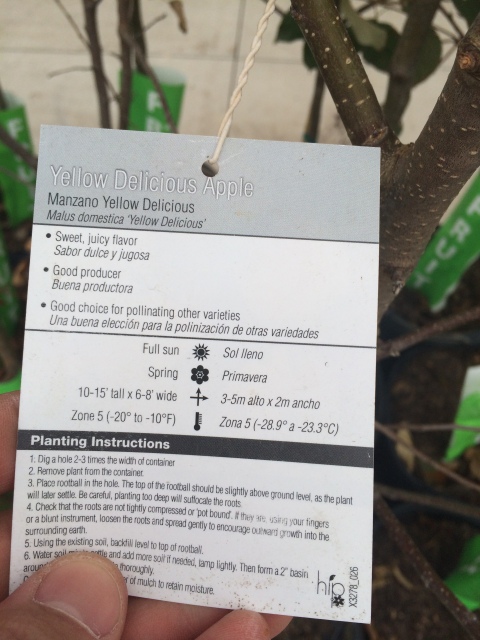 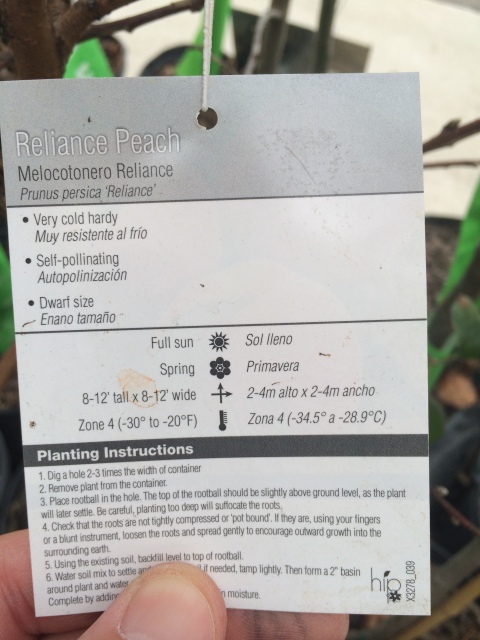 It was Sunday afternoon before I was able to find time to try and get the orchard planted.  I dug the holes and then set the fences as I was able to drag then fence sections down.  To cut the fence sections I rolled out 20′ and used bolt cutters to make clean cuts in the wire.  I specifically only bought 7 trees because I knew that I wanted to use 20′ of fence so I would be left over with 10′ of fencing(which I might use to as a trellis for some concord grapes).  The first couple fence sections I rolled out didn’t have too much “memory” since they weren’t rolled as tightly.  By “memory” I mean the desire of the wire to return to it’s rolled state.  Despite not having much “memory” it was still difficult to wrestle around the trees with one person.  After the first two fence sections I started rolling the sections back on themselves to make them straighter.  This helped immensely with regards to placing them around the trees.

You can see the 1x board that I used under the roll to stop it from rolling back towards me. The patio umbrella weight was perfect to hold the loose end.

As you can see I was doing this myself so I needed to utilize some weights to hold the fencing in place.  Every fence section was harder to roll out since that part of the fence had been rolled tighter.  It took me three hours to plant the seven trees, cut the fence sections, drag the sections down to the orchard, set them in place, and stake them.  I was pretty happy with that speed.  If you were to do this with two people I think it would go more than twice as fast.

Here I already have four trees planted, two fenced, and all of the locations staked out.

Reverse angle of the last picture

Using all the math I could remember I believe a twenty foot section of fence creates a circle with a diameter of about 6’4″.  That is if they were perfectly circular, which they aren’t.  After starting to roll the fence sections back on themselves they were much easier to get into place and work with, the first couple sections wanted to keep rolling up into smaller circles so I was ending up with a heart shape.

The mosquitoes were out in force which made the work less enjoyable, but it was nice to get all the trees planted at one time and not have to find more time to get it done.  Now that I have done it once I think I could easily quicken the pace at which the trees get planted.  Hopefully, I can add several trees to the orchard next spring.  Our oldest son wanted me to plant a couple pear trees this fall but I couldn’t justify the expense of another roll of remesh for two more trees right now.  All said, I planted all seven trees and fenced them for around $265, which I didn’t think was too bad.  The fences should last several years or more, and could be used on future trees as well.

By the light of the golf cart headlights. You can see each fence is staked at 180 degrees with two oak stakes. 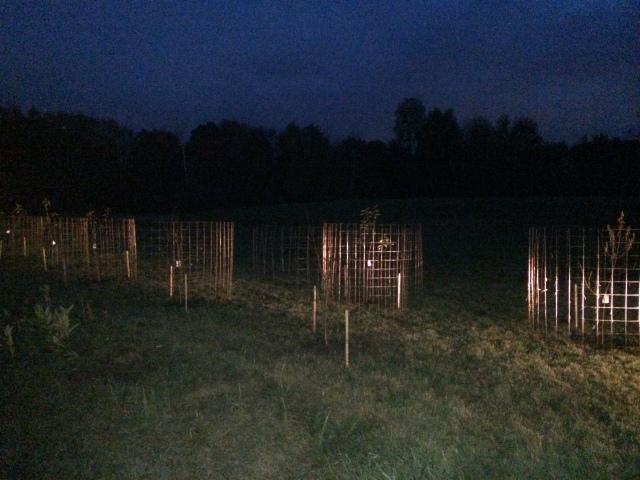 14 Responses to Orchard Phase One… Complete!

This is the blog for our little farm in Skagit county. Here we have Shetland sheep and Nigerian Dwarf goats. In addition we have donkeys, cattle, pigs, chickens, geese, and peafowl. The blog describes the weekly activities here.

wild tales from the journeys of lisa m. rose

Learning to do for yourself, saves you money and lets you live your dream

An English persons experience of living and gardening in Ireland

Just a glimpse into the life and thoughts of a stay at home, homeschooling, business owning Momma of 5, who LOVES learning, crafting, taking photos, road trips, adventure and family time!